On May 1st, I flew to Omaha Nebraska with ～100 other fellow CBS students to attend the 50th annual shareholder meeting of Berkshire Hathaway, with the hope to meet the school’s most famous alumni Warren Buffet, and his partner Charlie Munger.

I have been a student of their essays and annual letters and am familiar with their investment and personal philosophies. Nonetheless, only seeing them live did I truly understand how remarkable they are. One is 84-year old and other is 91, yet they still possess the youth, energy, and mental clarity to conduct 6 hours of shareholder Q&A. The dynamic between Warren and Charlie are truly like an old couple, with Warren being the mellow and politically correct grandma, and Charlie the witty but sharp-tonged grandpa. They projected their wisdom, humor, and positive energy to a fully-packed CenturyLink Center. 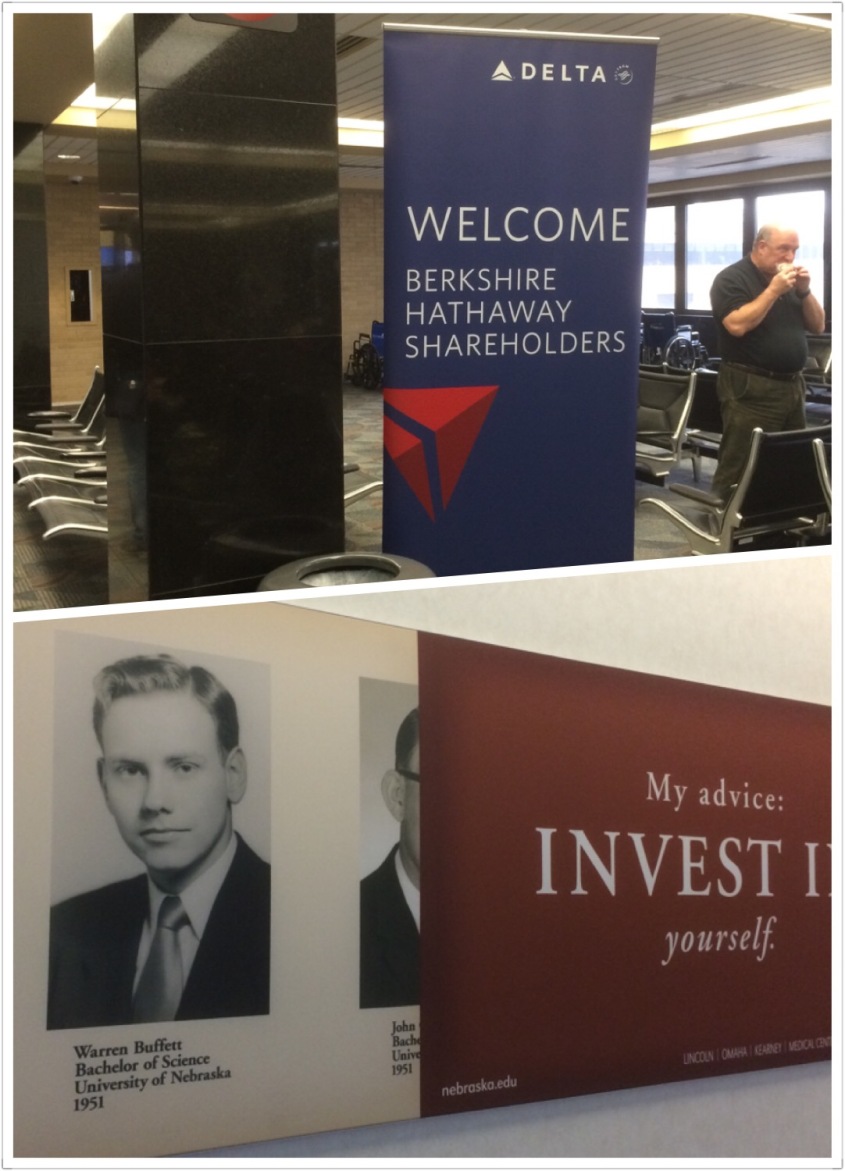 After the annual meeting, Warren stopped by briefly to greet the Columbia crew during our happy hour, or rather we lured him in with a root beer float :). 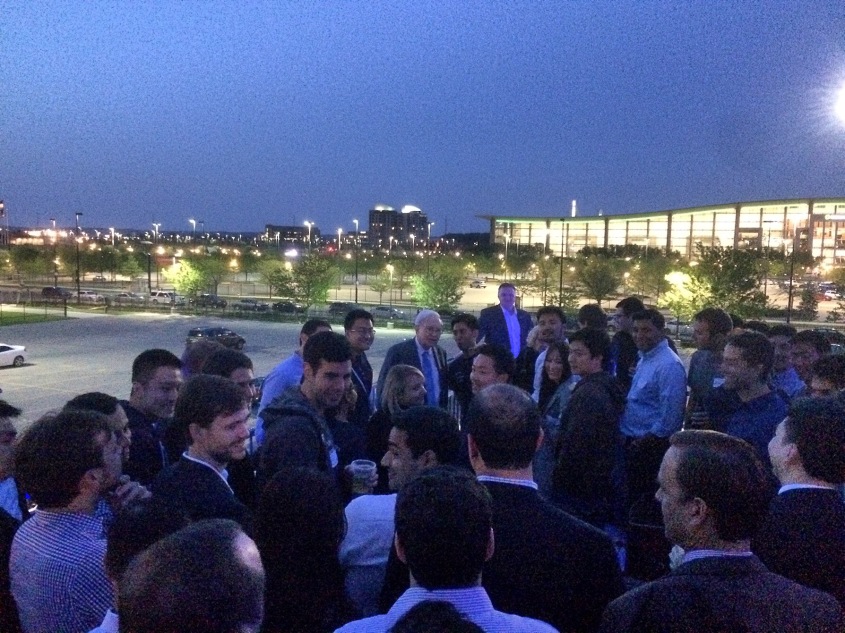 Afterwards the team watched the Mayweather vs. Pacquiao fight.

I stayed in Omaha for one extra day to avoid the high airfare over the weekend, and stumbled upon Warren and Gates having dinner at Piccolo’s Steak House. Thus this trip marked the end and height of my two year MBA journey at Columbia Business School. 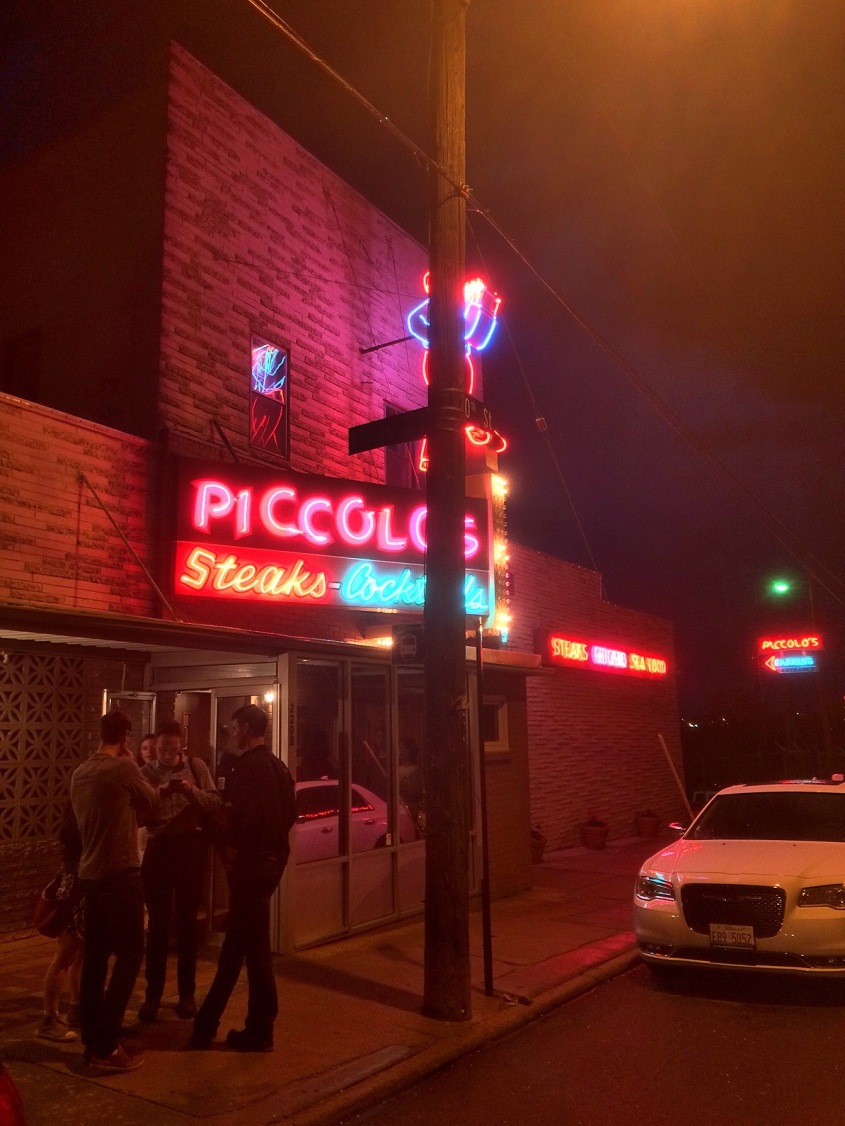 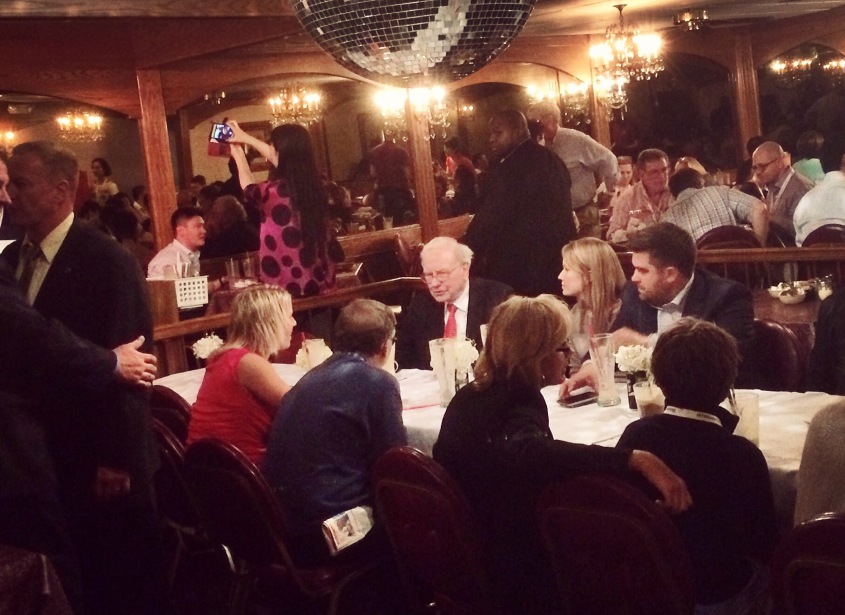 12 years ago, when I first arrived in the U.S. with only a few thousand dollars on me and no qualification to go to college (no SAT, TOEFL, recommendations etc.), I would never have imagined that today I would be sitting in the same room with two of the most successful and remarkable people on the planet. This reminds me of Paul Hilal’s (Pershing Square) quote “Life is more healing than you think.” Thank you Columbia Business School for the life-changing two years!Below are my synthesis on the most memorable quotes by Warren and Charlie during the shareholder meeting. I wish the two legends good health for years to come, as I still have a lot to learn from them :).

Q: On reputation and integrity

Charlie: “Nothing is more important than behaving well, we try to behave better than the average person.”

Buffet: “When you get old, you get the reputation you deserve, for a short time you may be able to fool people.”

Buffet: “Lose millions of dollars by honest mistake, I could forgive. Jeopardize a shred of Berkshire’s integrity, I will be ruthless.”

Q: On if the U.S. market is overvalued now.

Q: Could not remember the question.

Buffet: “That’s how he keeps his job.”

Q: On why few people think like them when investing

Charlie: “If people are not stupid, we would not have been so rich.”

Buffet: “It’s very likely that Berkshire will buy a German company in the next five years.”

Q: On why a 72-year old BRK shareholder even with shareholder discount got a higher quote from GEICO than from competitive insurance providers.

Buffet: “Every insurer has different actuarial models and cares about different things. We currently beat our competitors 40% of the time and convert a good number of customers, that number will never be 100%.”

Charlie: “You may find yourself not deteriorating as much as your contemporaries but still getting a higher quote from GEICO, but that’s not a bad trade-off to have”

Buffet: “The re-insurance business is not as good as it used to be. Too much promotional capital has come into the space.”

Q: How do you make people like you and work with you?

Charlie: “I am an obnoxious person, being rich and being generous is the only way to make people like me.”

Warren: “Take on qualities of people you like and admire and get rid of qualities that you dislike.”

Charlie: “When looking for marriage, intelligence, humor are not the most important things, the key is to look for someone with low expectations.”

Warren: “In our life time, we have seen corporate tax rate as high as 50%, since then it has gone down to 35% and American businesses have done fine. If companies want to bring back foreign profits, you could pay taxes.”

Charlie: “EU has done a lot of good and is a noble concept. But putting drastically different countries together has its flaws. It’s like going into business with a drunken brother in law. In its current form, EU won’t work.”

Q: On marketing synergy between GEICO and car dealer

Buffet: “Many things look good on paper but actually don’t work in reality, ask the investment bankers. GEICO has a low cost model and has always been.”

Q: On potential investor activism on Berkshire after they are gone.

Warren: “By the time my trust fund is dissolved, which may be 10 years after I die, Berkshire would be so large that no activist investors combined would be able to assault on this institution.”

Charlie: “I don’t know an activist investor that I want to marry into the family.”

Warren: “It is a simple decision to buy back shares, buy it when it is undervalued. But so many different motivations go into people’s mind in making this decision that it often gets distorted and capital transfer and destruction ensues.”

Q: On success and being lucky

Warren: “our success to a large extent has been luck. But we made it possible by staying curious and seeking wisdom from others.”

Charlie: “We were not doing so well until we had a track record.”

Warren: “I was successful in this business because I had a great teacher, exceptional focus, and the right emotional balance and stability.”

Buffet: “prefers earned income credit over raising minimum wage as the latter has to rise a large amount to be effective but would destroy jobs.”

Charlie: “China will be fine for a long time. For a good part of 200 years, America and China have gone to different paths. But in the last 40 years, China’s leaders have figured out what works and China has achieved remarkable success. This is good for humanity.”

Buffet: “Hope we see both each other’s virtues and flaws. No doubt China and the U.S. will be the two super power in the coming years. Hope to see the two countries working together more closely.”

Q: On what matters to them the most and why

Charlie: “1) Rationality is a moral duty and Berkshire is a temple of rationality and see it the way it is. Believe in Confucius values; 2) have to be generous because we are social animals”

Buffet: “On top of what Charlie said, I value Berkshire doing well. If I were not building something better than last year, I would not be happy.”