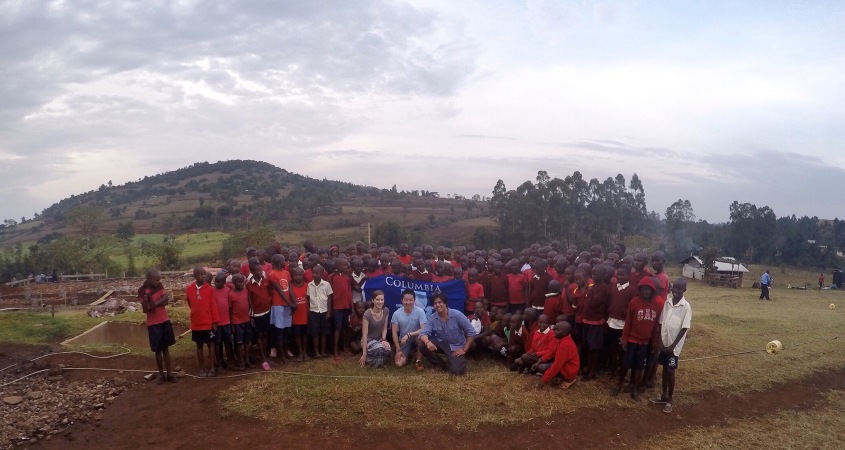 Thursday was the last full day of our stay in Enoosaen, I decided to take a leisurely morning stroll to explore the surrounding areas. Having seen the sugar factory in the distance for the past few days, I decided to walk toward that direction. If there is one thing that is the most impressive about Enoosaen or Kenya is how warm and welcoming the people are. No matter where I go, almost everyone (from kids to adults) who I waved or said “Jambo” (Hello in Swahili) to would wave back and gave me a big smile. Imagine how people would react if you do this in New York, China, or other countries. Slowly the sun rose above the hill, and I have walked past a small stream where our bathing water came from, said hello to scattering groups of kids going to school, and along a field of plantation to the factory. Occasionally a truck would pass by carrying a full load of sugar canes, stirring up the dusts on the road. It has not rained legitimately in quite several months… 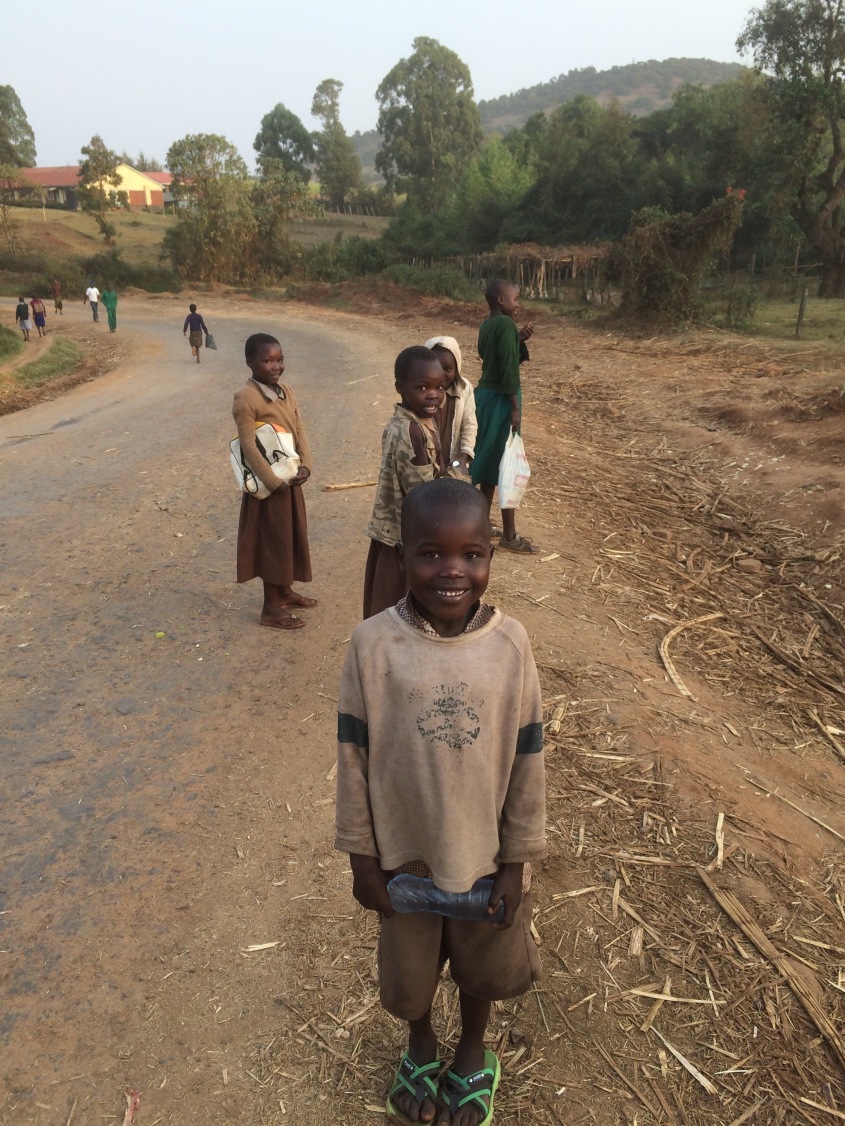 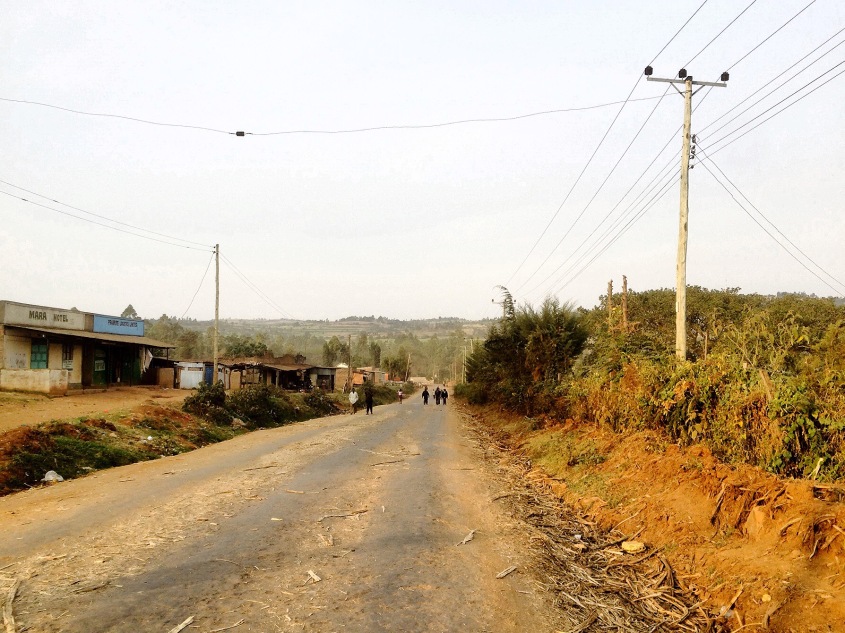 As I tried to cover up against the dust, a gentleman walked up to me and said “too much dust?” He introduced himself as Martin Masatoy and from there and we had a casual conversation until we walked to the gate of plant. It turned out Martin is an accountant at the factory and lives ~200 Kenya Shilling away by bicycle ride. From Martin I learned that the factory was built in 2009 and currently employs about 800 people. He offered to give me a tour after I come back to Enoonsaen. Again, this shows how friendly and open people are in the area.

After bidding farewell to Martin, I walked on past the sugar factory, where both sides of the road are elevated terrain. The sun is in its full morning glory and I climbed the slope of the roadside, wanting to take a nice panorama. As I climbed over the slope, the beautiful Enoosaen landscape was revealed in front of my eyes – maze field and sugar factory in the near ground, the town center in the middle ground, and lush mountains in the background. Not too far away nearby a lineup of mud-house stood two man, as I have done all along, I saluted him with a big “Jambo~.” Both men “Jamboed” back and one of the waved to me, asking me to come closer to him. The man’s name is Samuel (I’d like to call him Uncle Sam). It turned out he owns the entire block of sugar cane field next to the sugar cane factory, and I had stumbled upon his house and farm by luck. Five mins into the conversation, Sam took me by hand in the typically Maasai way of showing friendship (only men are allowed to do this) and invited me to inspect his field more closely and visit his house! In his housing complex, he introduced me to his Mother, wife, and kids. We talked about his family and his farm, where I come from and I what I am doing in Enoosaen. Sam was so warm and welcoming that he started calling me his friend after 10 mins and invited me to bring Nik and Julie back for dinner at his house. After learning our project at KCE, he offered to donate land to build a new school J. At the end of the visit, we exchanged phone numbers and Sam gave me a beautiful Maasai beaded bracelet (patterned after the Kenya flag) as a parting gift! “Because you are my friend, I am giving this to you, please don’t give it to someone else,” he said. Why would I J? What transpired in the last 15 mins had totally been unexpected and one of the most amazing cultural interactions of my travel so far! I shall forever keep the bracelet as a reminder of this adventure in the morning in Enoosaen and Sam/Kenyan people’s welcoming nature. 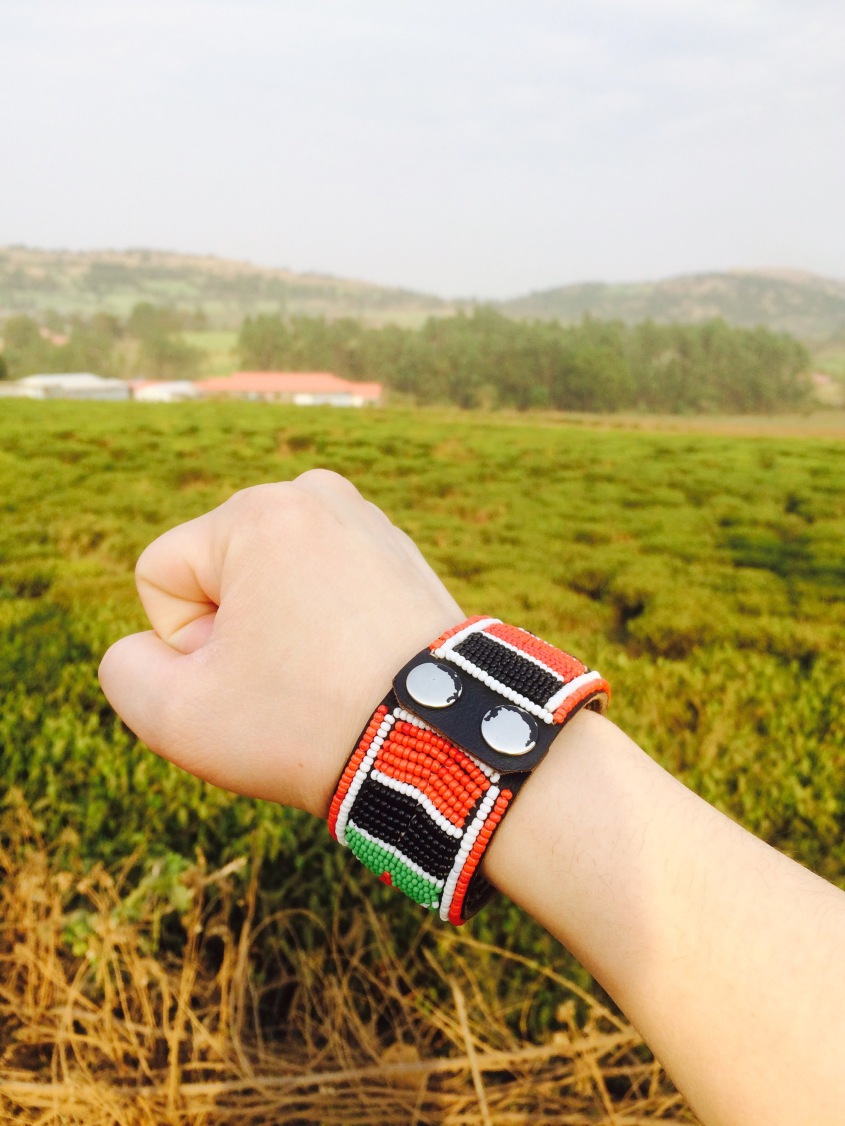 What I did not know at that time was this was only the beginning of a Legendary Day! After coming back from the morning excursion. Nik, Julie, and I packed our backpacks, grabbed some quick breakfast, and embarked on a hiking trip with our fourth team member, the only other foreigner in town Cal. Cal is a Brit and graduated from university last year. He had been volunteering with a non-profit-organization called Seed-to-Sew in Enoosaen for the past four months. The organization offers a program where participating girls from the surrounding areas make beaded bracelets on their downtime, the bracelets were sold in a Boutique shop in New Jersey and the proceeds would directly go to the funding of their school fees. Cal, as a program administrator, would go to Nairobi once or twice a month to procure glass beads, visit the girls door to door to distribute the beads, and collect finished bracelets, and manage the cash and bank accounts. On average, it took a girl two hours to make a bracelet, for each they make they would get six dollars. In Cal’s own words, the past four months have been bitter sweet for him. It was sweet to live among the locals and experience a completely different culture and environment in an African country, which had opened his eyes to new perspectives on life. It was bitter because of the loneliness. Prior to us coming, Cal had been the only foreigner in town. Needless to say, he was really excited to see us coming and gladly offered to accompany us for the hike.

We have thought of climbing the mountain next to school for the past three days but never found the time. Since our first interview with the girls were scheduled in the afternoon, it was perfect to slot in a climb in the morning. The mountain was not too high, but the weather was supper hot and dry, which made the climb a good workout. Along the way, there were farm house and an open-air church. This was Cal’s secret spot. You really have to go off the path to find it. After resting there for a few minutes, we continued the last one third of the climb, which was particularly steep. Overall it took us ~40 mins to reach the top, where cows (a couple of family live nearby the top) and a gorgeous 360 view of Enoosaen greeted us. The terrains were lush, broken up by trees, grass lands, plantation fields, and dotted by houses. The only sound was the wind and the grass, occasionally broken up by the sound of domestic animals living down below. It was serene. 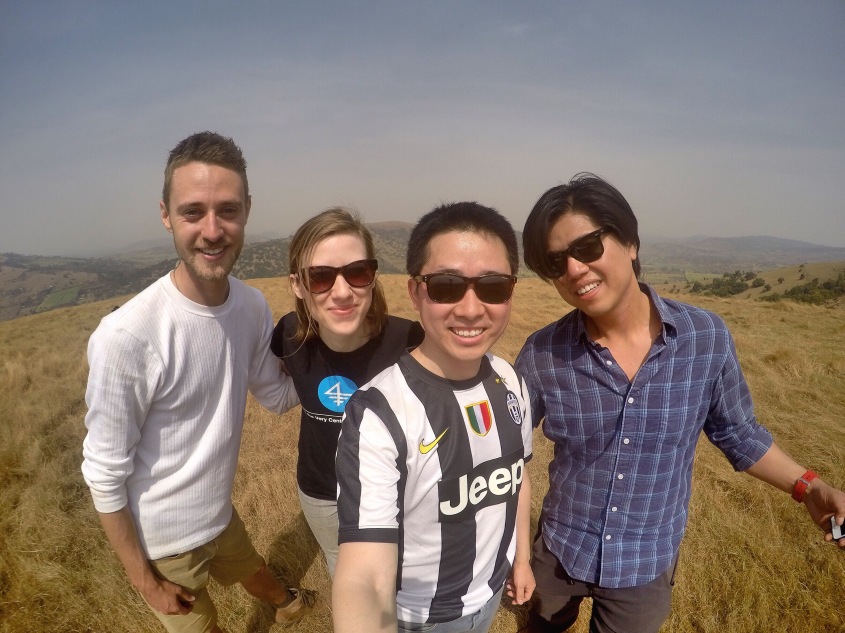 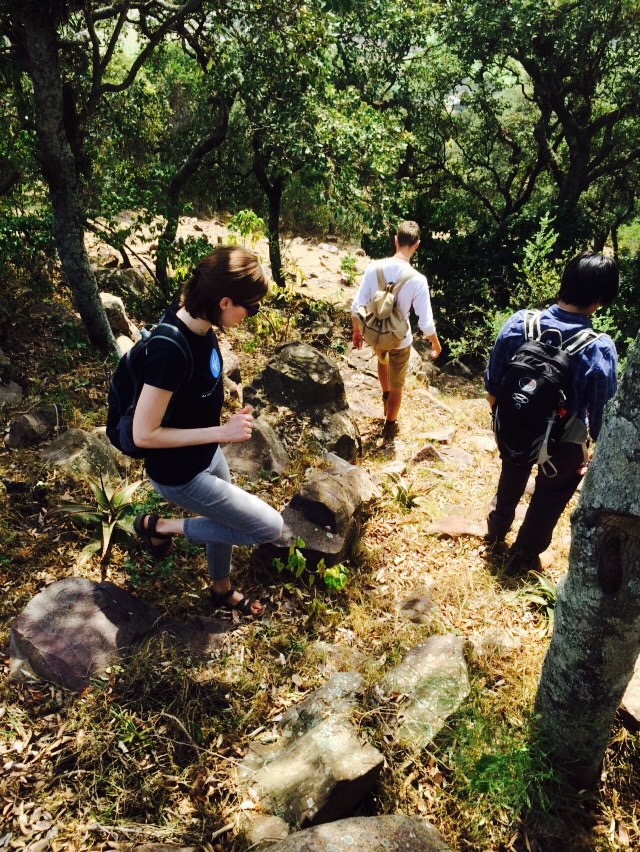 After the hike, we went back to school to continue the interviews with students (2 students each from class 4, 5, 7, and 8). After a night of reconfiguration, the new interview list + assessment approach worked much better than yesterday, putting less pressure students and allowing us more flexibility in managing the discussion. As we wrapped up the last interview of our trip, Unice stopped by with a tall gentleman Pastor James, who is also the chairman of the local board of directors for the school. Pastor James was there to greet us and brought with him some traditional Maasai gifts with him, Shuka and a beaded bracelet for Julie, Nik, and me. Now I have two braceletsJ! In addition, Unice told us the goat we bought was here and ready for butchering. She wanted to let us know in case we were interested in observing. Oh, the day just keeps on getting better! 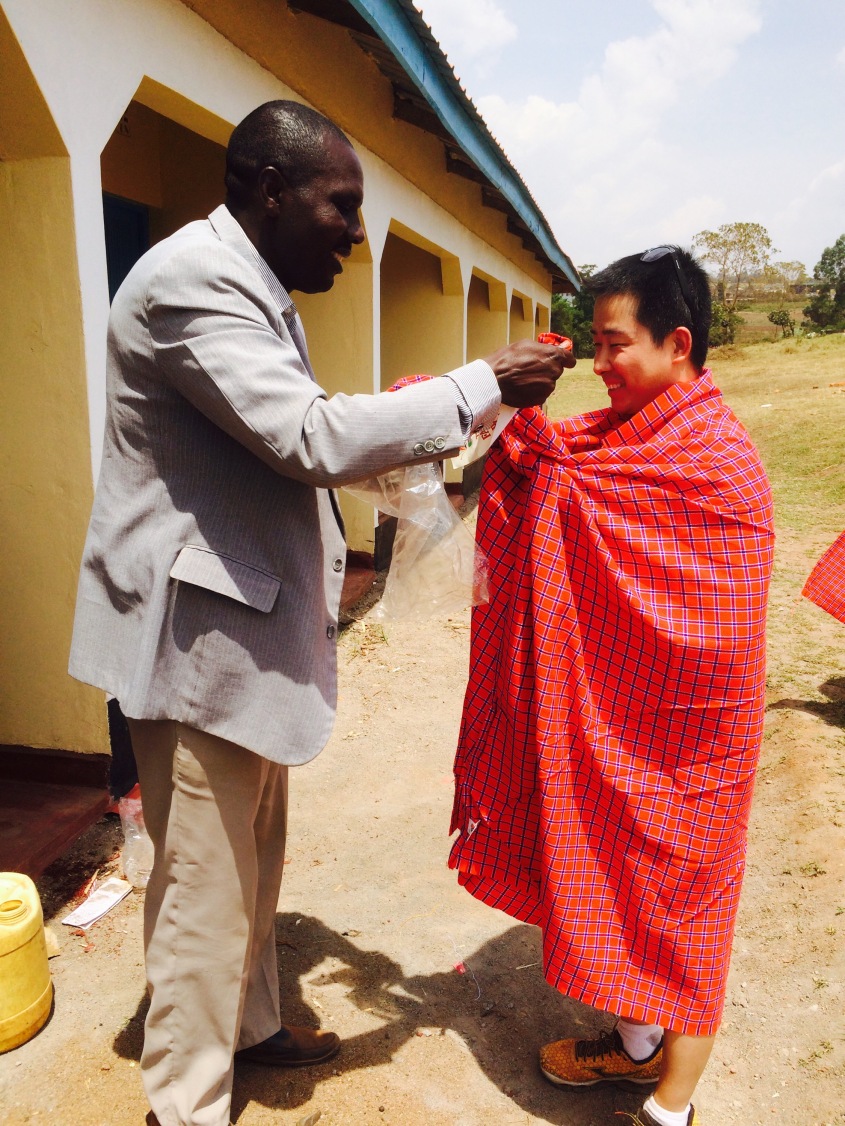 Now onto the butchering of the goat, four men (three teachers and one staff from school) took the goat to a bushy area at the edge of the school land. The actual kill was a swift job. One drive into the neck and one cut the throat and neck bone were severed, not much blood was spilled. The goat twitched a few times then met its maker. The school staff (whose name I forgot) used a cup to hold the dripping blood. As the blood flow dried up, to our surprise, he quietly walked away and drank the whole cup! We almost forgot that in Maasai culture, animal blood is a main source of diet, in addition to meat and milk. But what was freaking was this guy was missing one eye! While the one-eyed man was savoring the goat blood, the teachers had begun to skin the goat. It was with great proficiency and accuracy they removed the whole pelt, then skillfully butchered it, from ribs, to legs, to internal organs. 30 mins later, the goat had been fully processed and sent to the kitchen for cooking. The main chef’s name is Paul, a sturdy-looking dude. 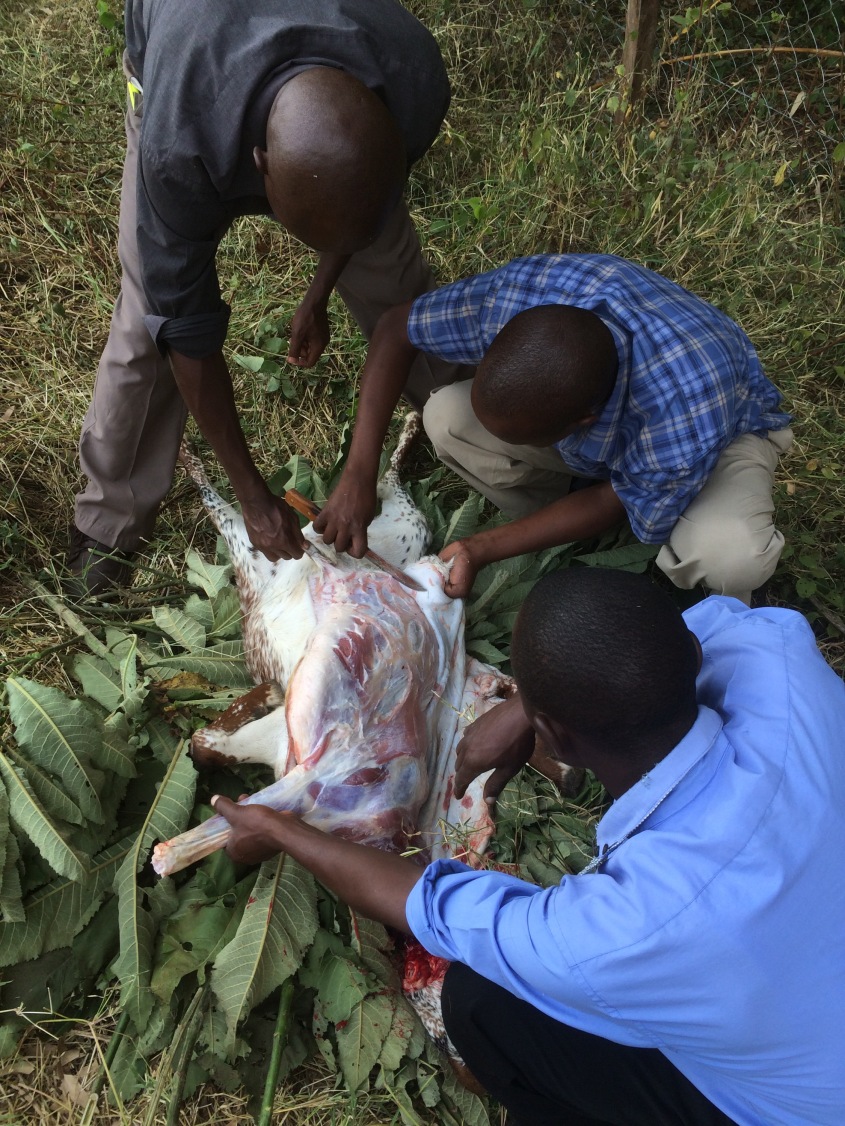 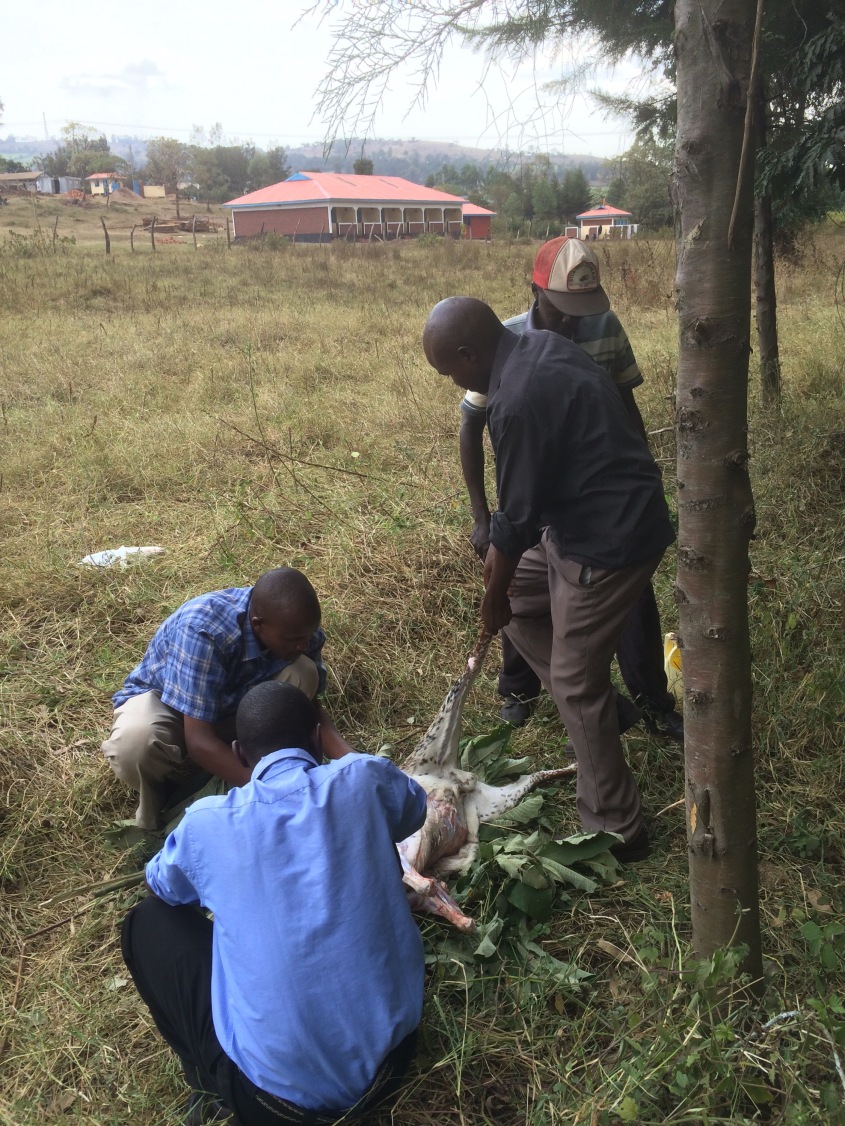 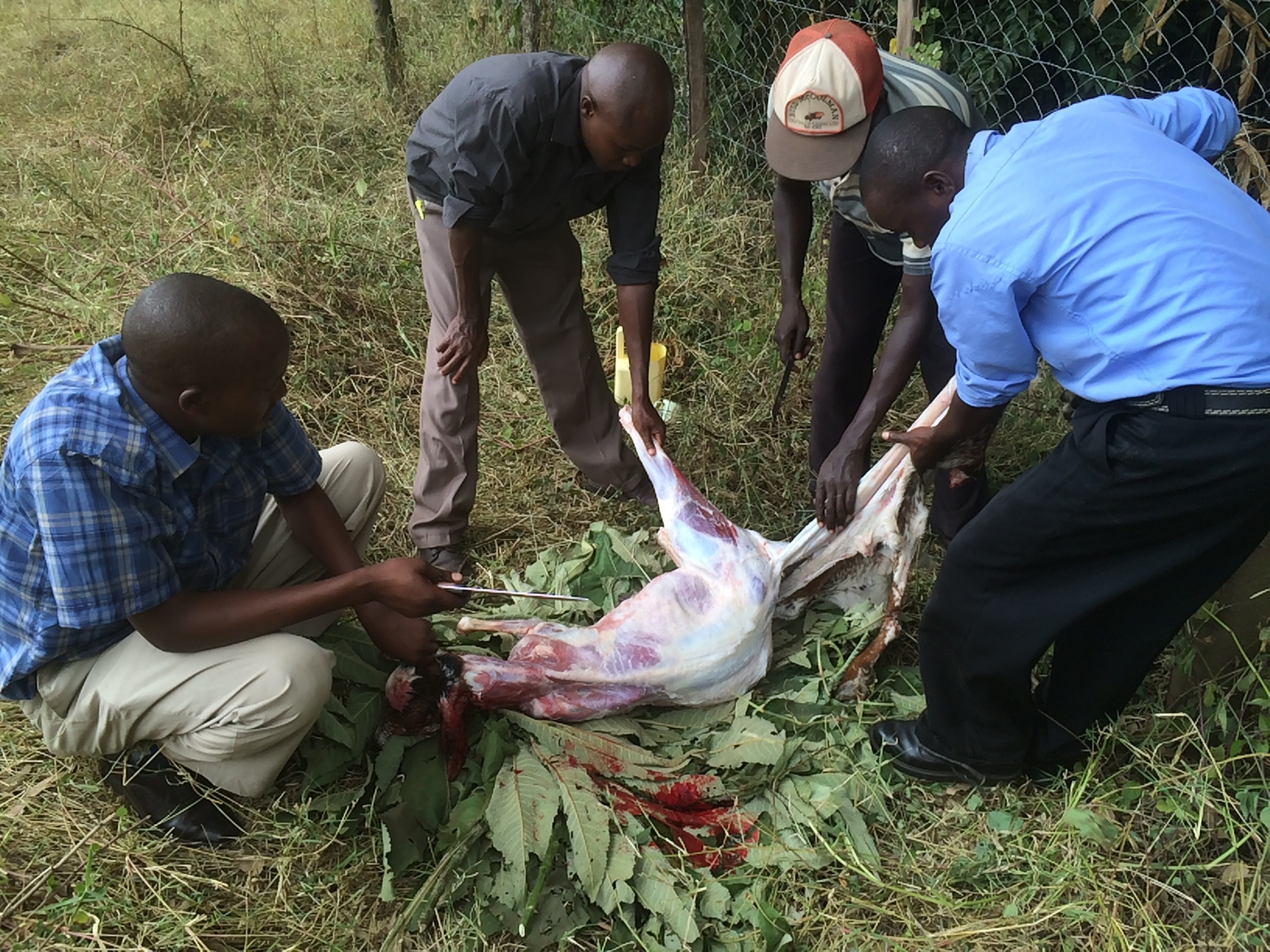 What was wicked was that it has not rained in the past few months, but as soon as we slaughtered the goat, dark clouds start swooping in across the mountain and rain started dropping.

While the meat is cut into pieces, the liver, lung, and ribs are being roasted over charchoal. In Maasai culture, the liver is given to the women, for its richness in Iron, and the men would share the ribs. There was no secret sauce with roasting, just adding some sea salt and the roasted delicacy came out juicy and delicious. Separately, Madam Serena was making plau, a rice + meat dish, underneath a tent on the school playground. 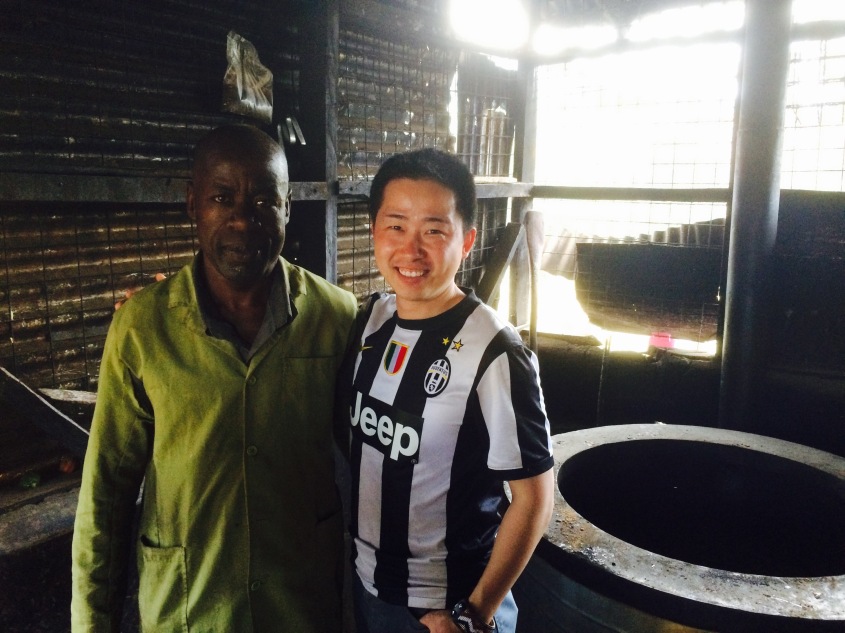 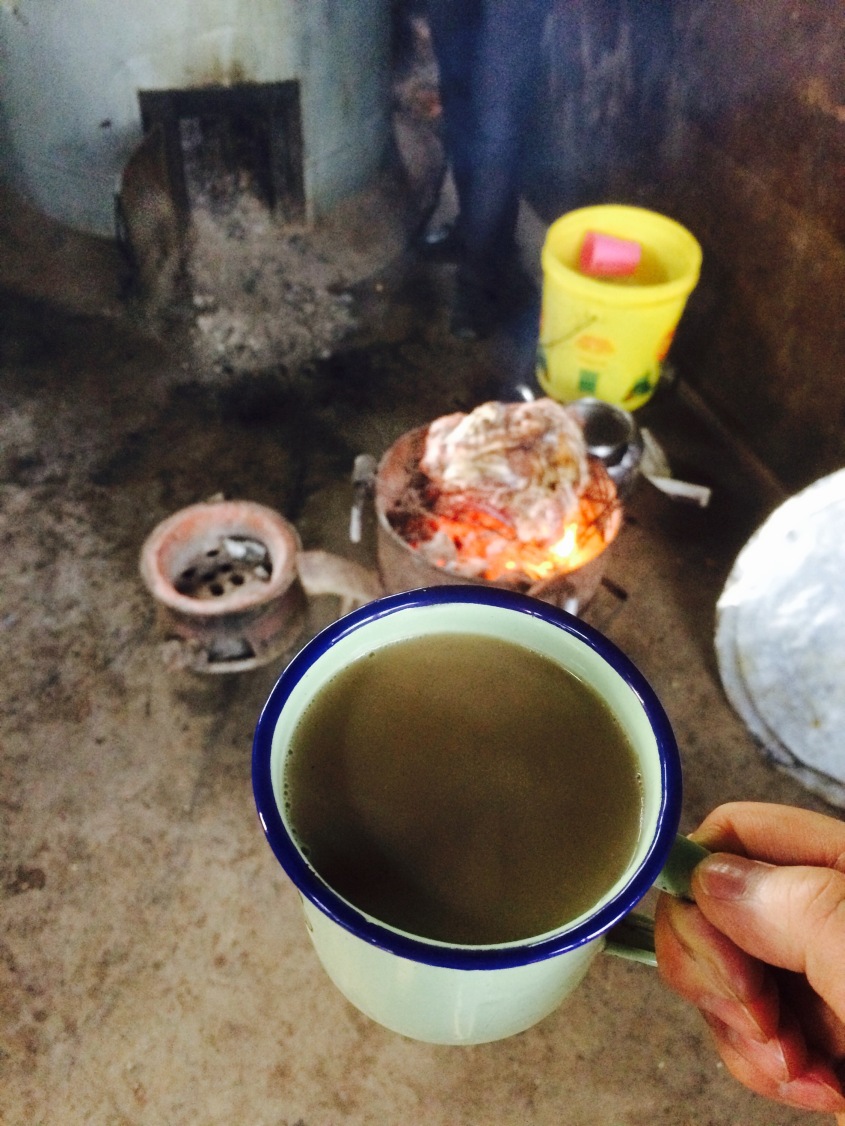 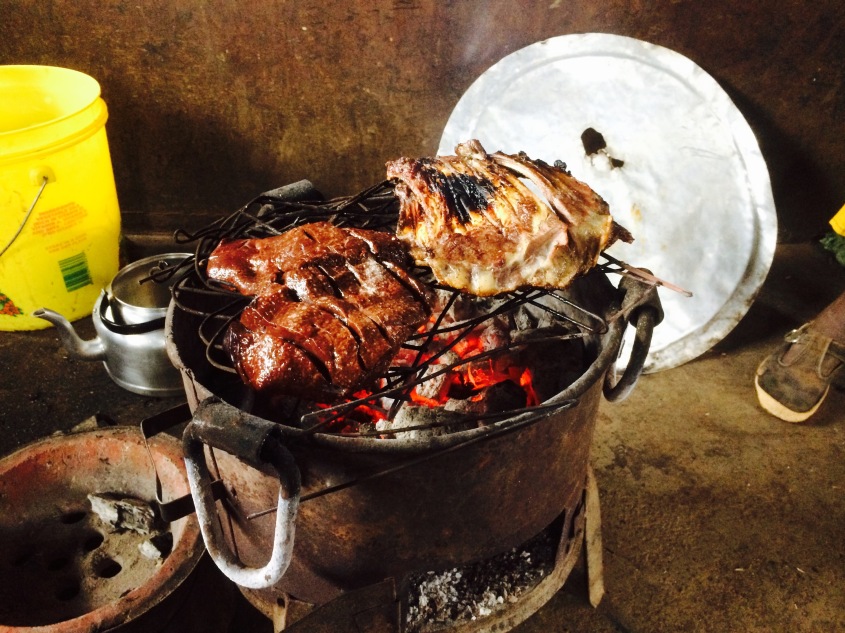 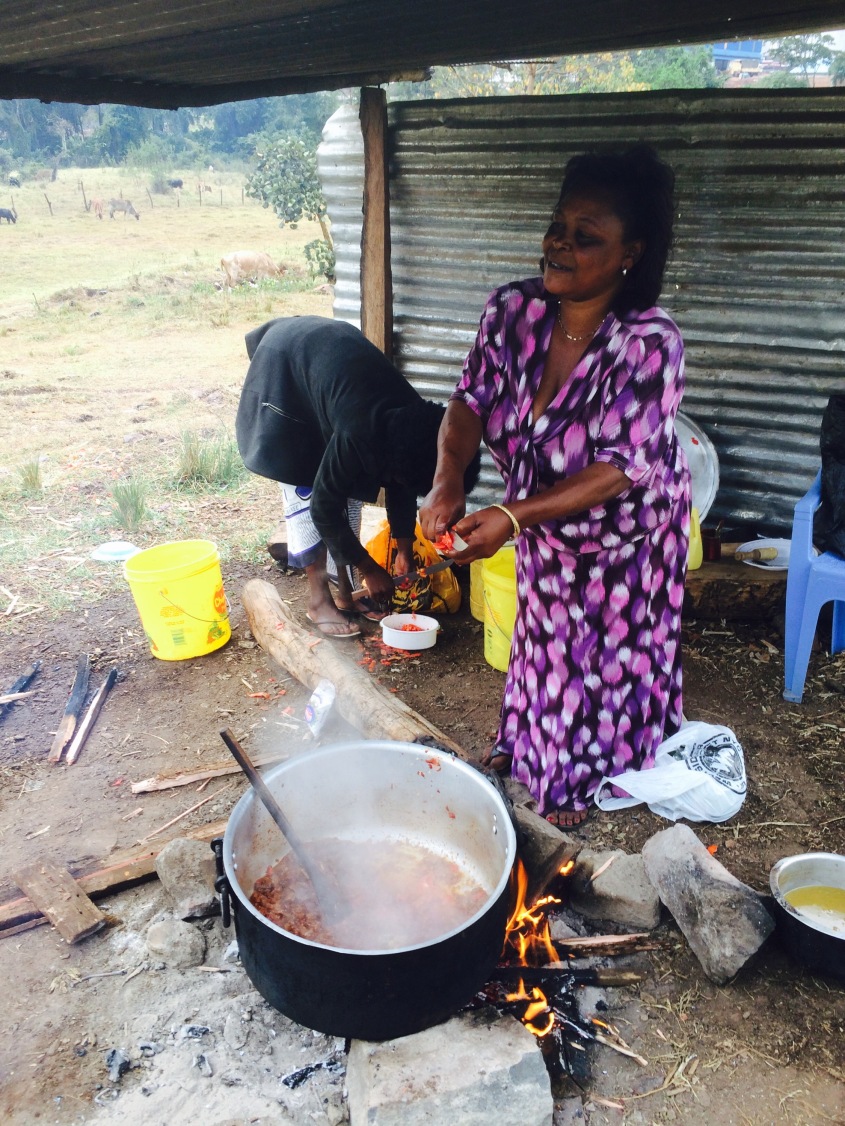 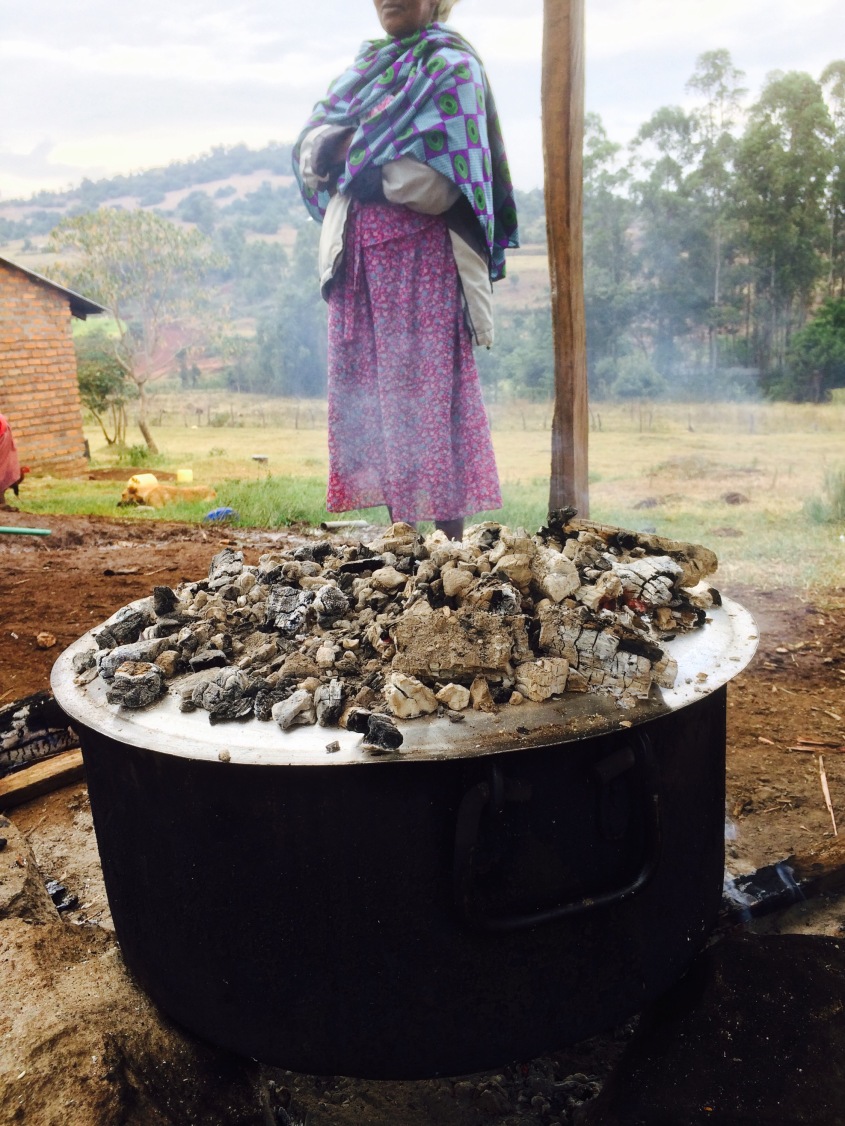 After finishing the ribs, the rain had stopped. We brought out the Columbia Frisbees and invited some students and teachers to join us for some games while the dinner is being made. It was a wonderful time for everyone! 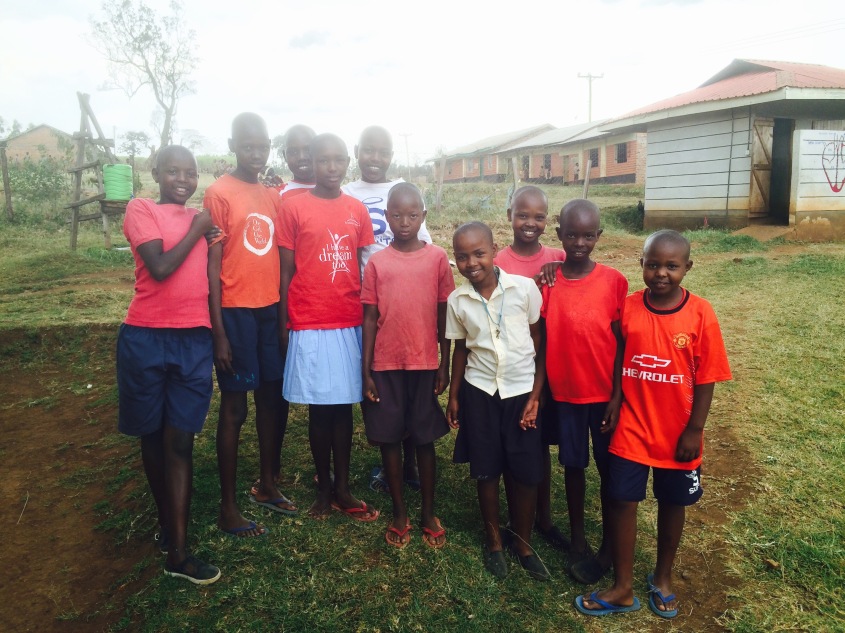 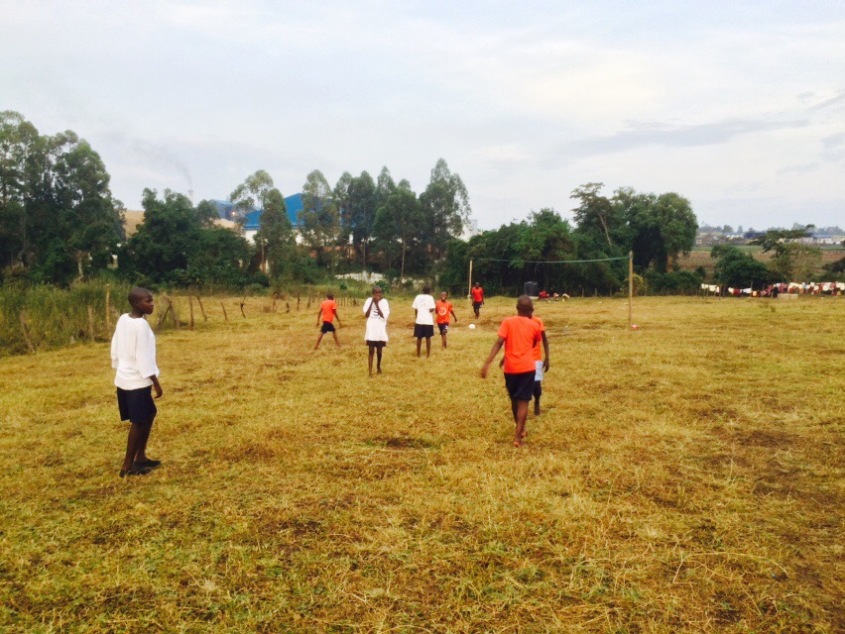 At around 7:00pm, dinner was ready. Before we officially kick off the feast, we took a picture with the entire school to keep the beautiful memory that we have built with the beautiful people in Enoonsaen. We feasted, cheered, and laughed over dinner until the sun is far behind the mountain. 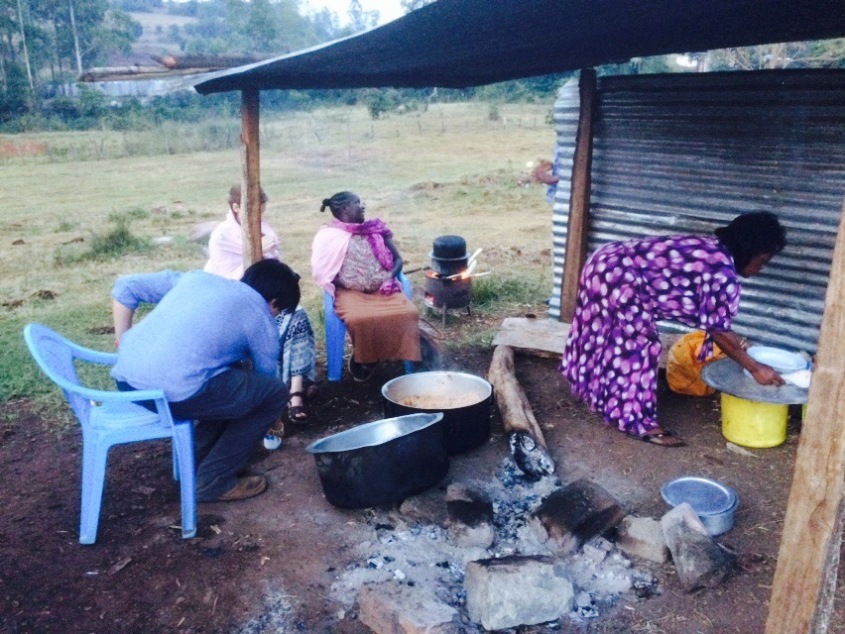 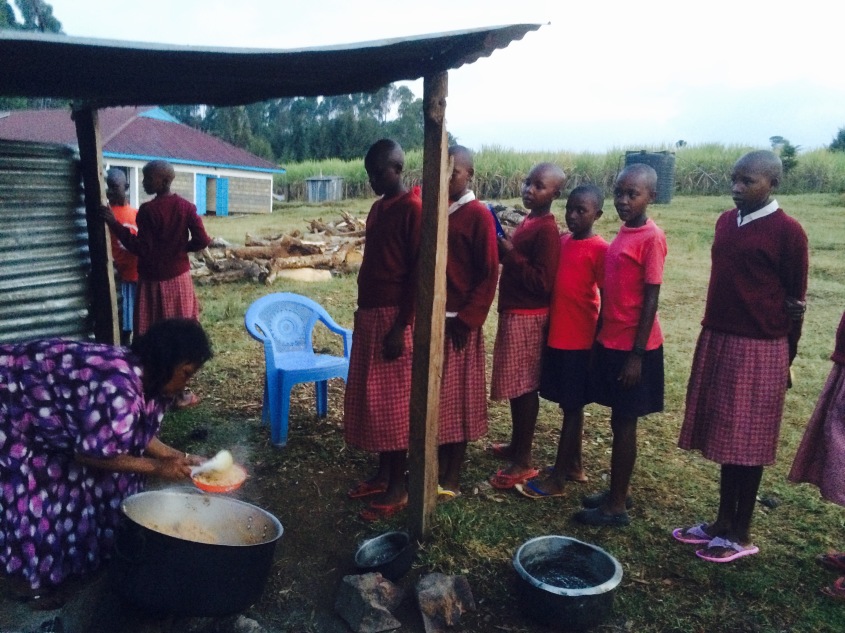 A legendary day worthy of the grand finale of our four-day stay in Enoosaen!